The world’s largest e-commerce retailer recently posted the listing on LinkedIn for a software development engineer for its Colorado offices.

Amazon has modified a job listing that originally stated the retail giant is looking to build a blockchain-based advertising platform.

The world’s largest e-commerce retailer recently posted the listing on LinkedIn for a software development engineer for its Colorado offices. Amazon’s management is planning to expand its advertising business by using its existing cloud-based infrastructure and online retail data.

“Our new team in Boulder, CO is looking for a [Senior] Software Engineer to work within our Advertising FinTech team focused on a Blockchain ledger, billing, and reconciliation systems to provide data transparency on transnational financial data.

This is an opportunity to define a technology architectural direction of a greenfield area for Amazon’s advertising business using the newest technologies.”

After reports surfaced about the company’s potential blockchain ambitions, Amazon quietly removed its reference to blockchain technology. The revision now focuses on the company’s use of a financial ledger.

“Our new team in Boulder, CO is looking for a Sr Software Engineer to work within our Advertising FinTech team focused on a financial ledger, billing, and reconciliation systems to provide data transparency on transnational financial data.”

Amazon’s ambitions in the world of blockchain and cryptocurrency are constantly under the microscope.

The partnership involves ongoing development work on a distributed web incubator that was introduced by IDEO CoLab in February. Amazon and its other partners will be hosting various accelerator programs aimed at helping blockchain-related startups.

Earlier in May, Amazon was awarded a crypto-related patent involving the proof-of-work algorithm used by the Bitcoin blockchain to manage and process transactions on its network.

Cross-border payments platform Currencycloud has raised $80 million in funding from SBI Group, Visa and other investors.

Per a Jan. 27 press release, London-based Currencycloud secured $80 million from SBI Group, Visa, International Finance Corporation, BNP Paribas and Siam Commercial Bank. Following the investment, Colleen Ostrowski, senior vice president, and treasurer of Visa Inc will join the board of Currencycloud. By its own account, the startup — which provides embedded B2B cross-border payments — is going to allocate the raised funds for its further growth, expansion of its portfolio of emerging payment methods and development of its partner ecosystem. Currencycloud also intends to integrate with major software platforms and begin support of alternate payment methods such as mobile wallets, instant payments, and cards. 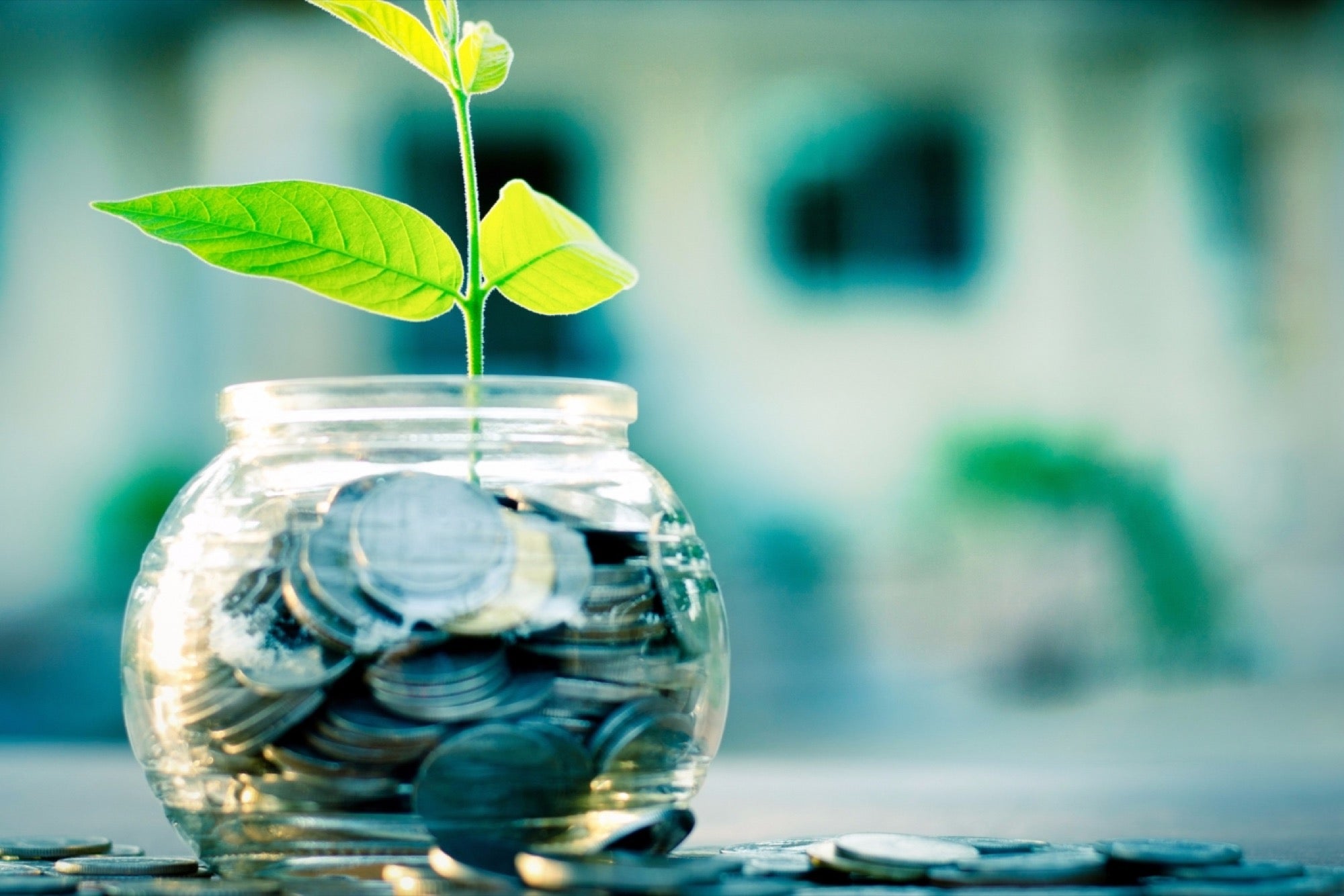 SBI Group — one of the major investors in Currencycloud — has actively pursued partnerships and initiatives across the blockchain and cryptocurrency industry. In late December 2020, SBI cooperated with Germany’s second-largest stock exchange Boerse Stuttgart Group to promote the adoption of digital assets. Specifically, SBI planned to invest an undisclosed amount in two digital asset-focused subsidiaries of Boerse Stuttgart Group — Boerse Stuttgart Digital Exchange and Boerse Stuttgart Digital Ventures. That same month, SBI Holdings was considering paying shareholder dividends in the form of XRP tokens, following the same practice by its subsidiary MorningStar. SBI would launch the program during the fiscal year ending in March 2020, with Kitao further stating that it is opt-in.

Payments behemoth Visa acquired financial technology firm Plaid for $5.3 billion. Plaid developed a network that allows users to easily connect their financial accounts to the apps they use to manage their financial lives. January has seen an array of industry-related investments so far, with TaxBit, a crypto-oriented tax compliance firm, raised $5 million in a seed round that had seen participation from the Winklevoss twins’ family office, Winklevoss Capital, and major crypto exchange Binance invested an undisclosed sum in blockchain data monetization startup Numbers.

China’s Bitcoin (BTC) trading volumes have continued to drop, hitting a two-year low on peer-to-peer exchange LocalBitcoins. According to the Bitcoin statistics website Coin Dance, China’s BTC trading volumes have been gradually dropping from late 2019 to the present, touching to their lowest weekly volume in more than two years. 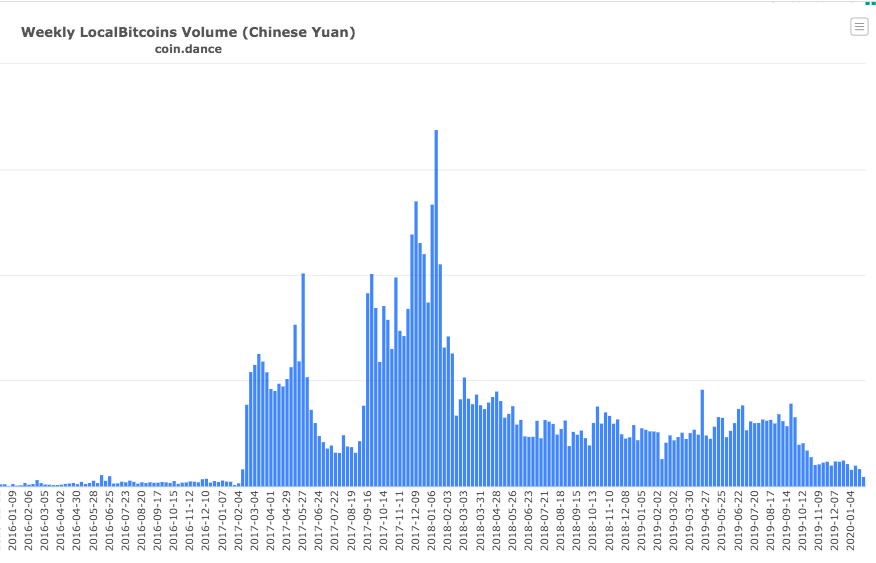 China’s Bitcoin (BTC) trading volumes have continued to drop, hitting a two-year low on peer-to-peer exchange LocalBitcoins. According to the Bitcoin statistics website Coin Dance, China’s BTC trading volumes have been gradually dropping from late 2019 to the present, touching to their lowest weekly volume in more than two years. During the week ending on Jan. 25, China traded just about 4.5 million yuan ($648,000) on LocalBitcoins, down over 90% from the intra-year weekly high of more than 45 million yuan ($6.4 million). The all-time high of China’s weekly Bitcoin trading on LocalBitcoins was hit in January 2018 and accounts for 168.6 million yuan ($24.3 million). 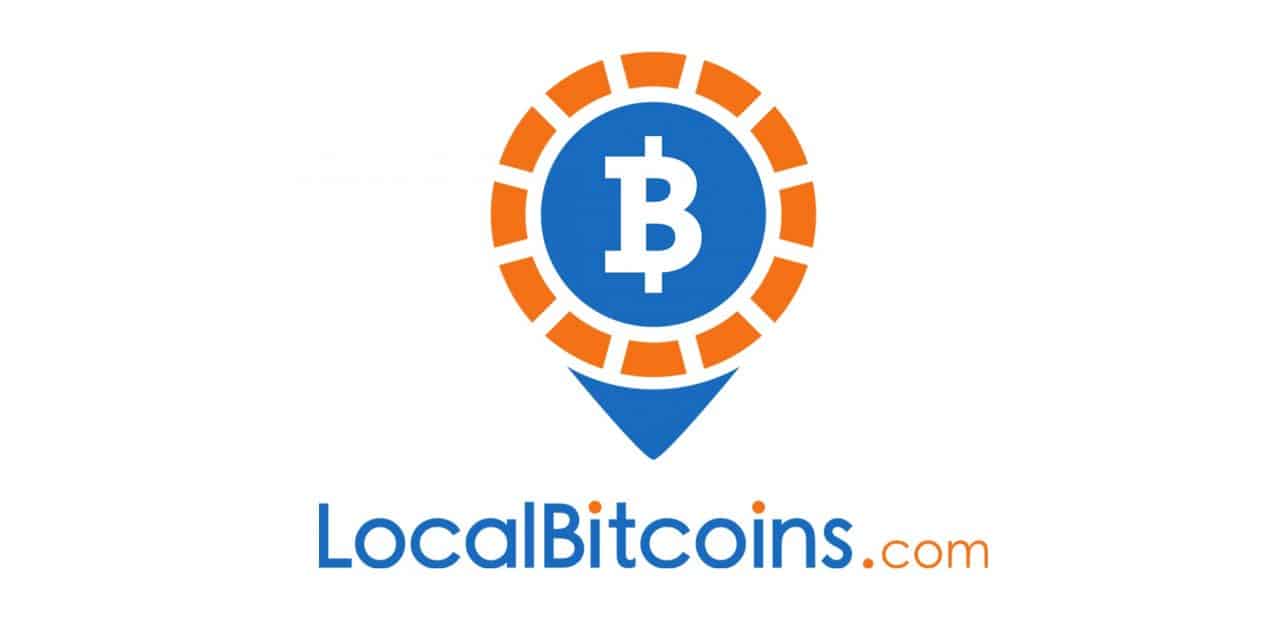 Correlating with the dropping Bitcoin indicators on LocalBitcoins, Bitcoin search volumes on China’s search engine and web services platform Baidu has reportedly slipped as well. According to the blockchain education platform Longhash, the Baidu search index of Bitcoin has recently seen a sharp drop, hitting a new monthly low of 12,913 searches. The overall decline of Bitcoin-related indicators in China comes amidst the country’s most important holiday, the Chinese New Year, which started on Jan. 25 this year. The beginning of 2020 according to the traditional Chinese calendar was troubled by the uncertainty brought on by a new coronavirus outbreak in China, which is suggested to be one of the factors behind a recent Bitcoin sell-off.

Recent events in the crypto space have caused observers to question the industry’s level of maturity. They make the case that mass adoption will be impossible thanks to the behaviour of some industry participants.

For them, examples like Tron founder Justin Sun using Kobe Bryant’s death to pump a digital currency or articles claiming the corona virus to be “good for Bitcoin” are not a good look for crypto. If we had any Tron we would be dumping it in the name of Kobi!

Do the Actions of a Foolish Few Hurt the Crypto Industry’s Public Image?

For many involved in the crypto asset industry, the aim of the game is mass adoption. If no one ever uses these potentially world changing innovations, they’ll struggle to change anything.

Many industry participants work hard for the betterment of the crypto industry. Some code and some educate. Others, apparently, do a less impressive job of representing crypto and promoting adoption.

One of those most disappointed with the industry and its recent lack of decorum is Cornell professor and blockchain startup CEO Emin Gün Sirer. In a tweet earlier today, Sirer accused the space of immaturity.

Yesterday, we saw a "selfie at a funeral," where a shameless promoter was trying to use Kobe's death to pump a coin.

Today, an article on coronavirus' impact on, of all things, crypto conferences.

This area is in dire need of adults in the room.

The CEO highlighted Justin Sun’s efforts yesterday to pump Tron just as the world discovered basketball star Kobe Bryant had died. Sun tweeted a picture of himself with the late sporting icon at a Tron event, promoting this year’s edition of the niTROn conference at the same time.

Referring to the Sun’s tweet as a “selfie at a funeral”, Sirer called the effort “shameless”. Others agreed with him in direct response to Sun’s post. The Tron founder was called “disgusting”, “scum”, and “a conman”, amongst other things by those responding.

Kobe, was great to have met you in niTROn 2019. Mtg you was one of my life's greatest honor & privilege, I'll forever remember us on stage discussing the future of blockchain. We'll have a moment of silence in your honor during niTROn 2020. R.I.P. pic.twitter.com/oMqU9ZpkKh

Coronavirus is good for bitcoin https://t.co/Ix7PEaEVIA

The author of the satirical piece included tweets from those crypto proponents who used the tragedy as an opportunity to shill digital assets. Those included make the argument that paper money is carrying the virus and making its spread an inevitability. There is no evidence that this could be the case.

From One Bad Look to Another?

The crypto asset industry already knows the harm a bad public image can do. The first time many people heard of cryptocurrency was in relation to the dealing of illicit goods and services on the dark web.

Despite evidence now suggesting that only a tiny portion of Bitcoin transactions relate to illegal activity, the industry still carries the stigma years on. Ask ten strangers in the street what they know about Bitcoin and you will definitely hear “drug dealing” mentioned more than once.