Things seem to be looking up in the #crypto space today, especially in #Ripple’s (XRP) and #Ethereum’s (ETH) market. As top #cryptocurrencies by #market cap, #ETH and #XRP have surged significantly in price, which is quite impressive considering their downtrend some days ago. 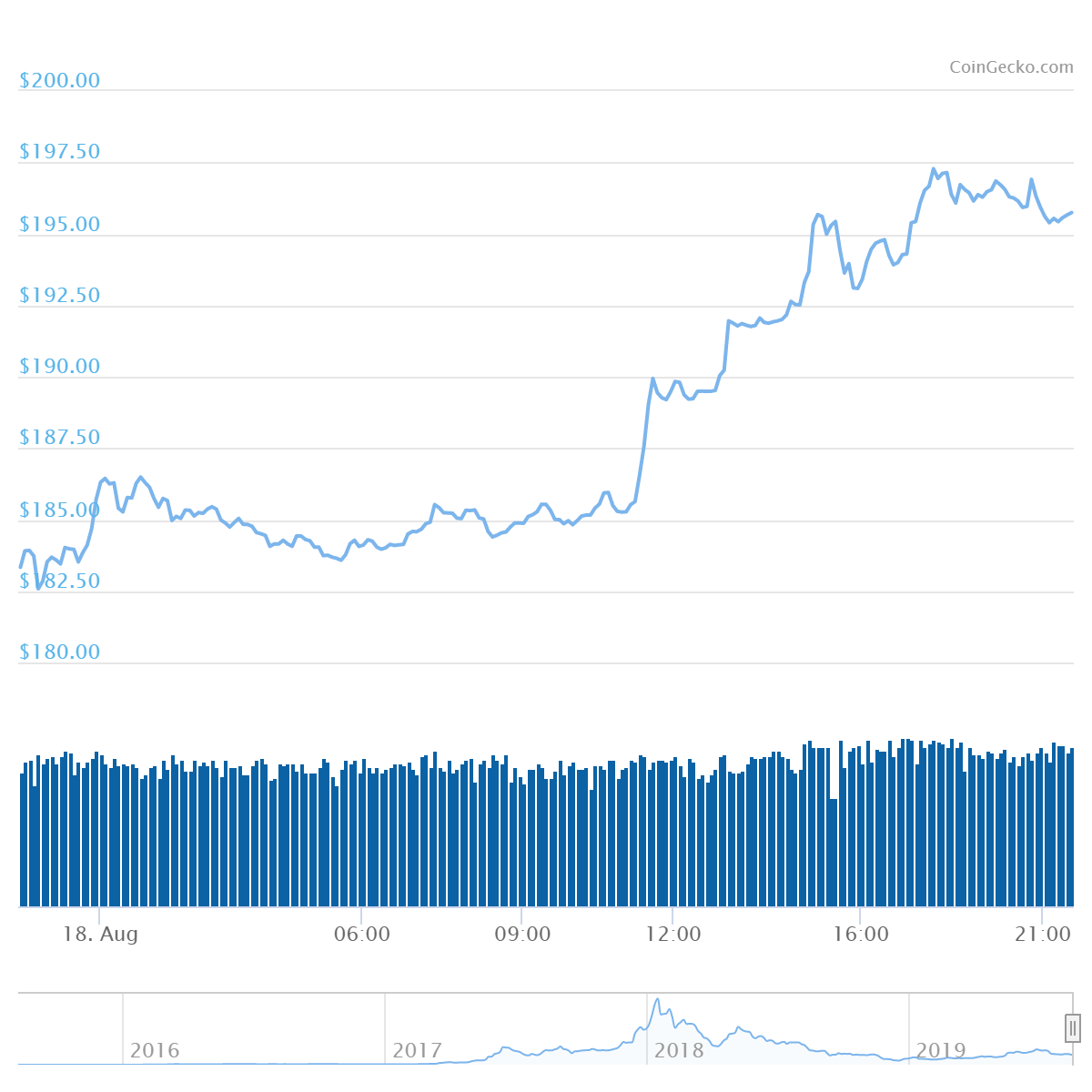 In the same vein, it’s even more remarkable where ETH has come from, given its low of $178.14 on August 15, 2019. The last time the cryptocurrency traded at that price range was on the 11th of May 2019. As such, there was a lot of anxiety in the crypto space that things may soon become gloomy again. 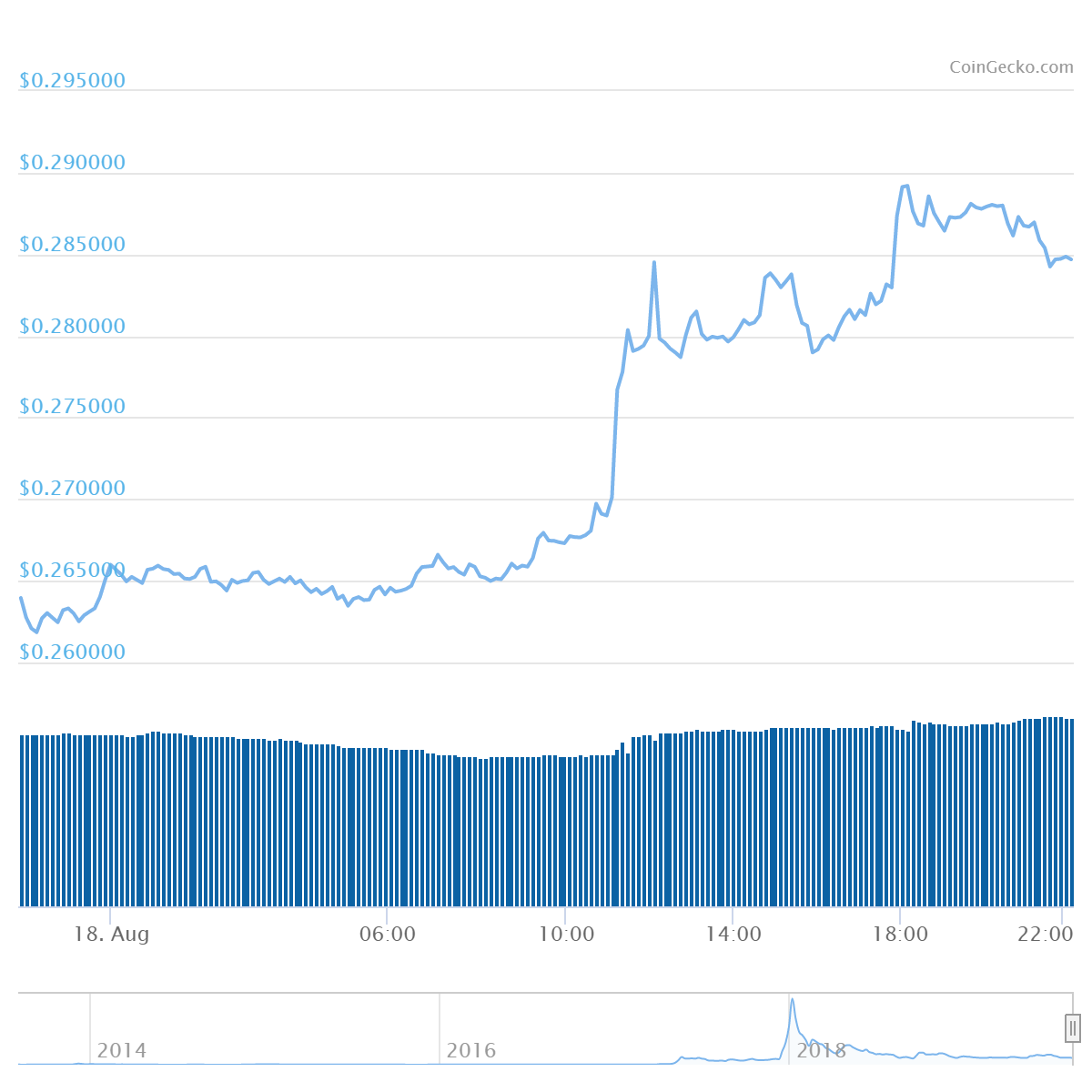 Before this time, XRP had declined to $0.252 on August 14, 2019, which was entirely unexpected. The latter can be attributed to the fact that the last time XRP was valued around $0.25 was on September 2018. That is to say, even Bitcoin’s low of $3,400 on December 2018 was unable to bring down XRP’s price to that level until this month.

Sentiments That XRP Could Decline Further

XRP’s significant decline had caused a lot of agitation with several analysts predicting it will go lower than $0.20 soon. Peter Brandt, for instance, opined on August 14, 2019, that if Ripple, the blockchain company behind XRP is unable to hold the virtual asset’s support above $0.24, then XRP could tank to $0.020725. Brandt also stated on July 11, 2019, that a correction in Bitcoin’s price would take a toll on XRP to see the asset priced at $0.16.

While these predictions were ongoing, several loyal XRP hodlers were still confident that XRP could make a U-turn and even experience a bull run. On August 15, 2019, Akwa Flow, a crypto analyst remarked that on August 14, 2019, XRP reached a 33 week low which is similar to what it did about a year ago before spiking. Thus, this could be another signal for a bull run in the XRP market.

What’s Your Thought On This?, Let Us Know In the Comment Section Below.
Post Views: 420
Related Topics:ETHethereumFeaturedGalleriesLatestRippletrendingXRP
Up Next

Vitalik Buterin: Ethereum’s Scalability Issue Is Proving To Be A Formidable Impediment To Adoption By Institutions

Consensys Lays Off Additional 14% of Staff

Consensys Lays Off Additional 14% of Staff

Blockchain software company Consensys let go of an additional chunk of its staff while splitting its focus in two separate directions. Consensys cut its employee base down by roughly 14%, the company announced on Feb. 4 in a press release. Headquartered in New York, Consensys has also decided to split the company. Part of the operation will continue in the software sector while the other part pursues investment endeavors, the press release said.

Job cuts are nothing new to Consensys as the company previously headlined multiple stories regarding staff reductions. Rumors circulated in December 2018 surrounding a possible 60% staff cut. January 2019, however, only yielded a 13% staff cut. With its roots in the Ethereum blockchain, Consensys has multiple associated projects, including Ethereum wallet Metamask and Consensys Codefi.

Consensys now has two divisions — one to continue in software building, and the other to work on the venture side of the table, the release explained. With its 14% job cuts, Consensys is “restructuring teams to be better aligned with the needs of a focused software development company,” the statement said.

Enterprise blockchain platform Insolar is launching its own mainnet, debuting its native Insolar Coin (XNS) to replace its formerly used Ethereum-based token INS. After successfully piloting the testnet in 2019, Insolar will be rolling out the commercial launch of Insolar MainNet on Feb. 3, the firm said in a press release.

According to the firm, holders of the Ethereum-based ERC-20 token INS will be able to swap their tokens for XNS on the first day of the mainnet launch. Insolar users will be able to store their XNS tokens on Insolar’s new native cryptocurrency wallet, Insolar Wallet, the firm noted. As part of the token swap, some crypto exchanges announced that they will be temporarily closing INS deposit and withdrawal services in order to support the token swap.

As detailed in the Insolar Economic Paper issued in June 2019, the XNS token serves as a medium of exchange and a store of value and can be used for payments and staking. Fueled by XNS token, the Insolar MainNet is the primary public network based on the Insolar Blockchain Platform that is designed to build a blockchain-driven application marketplace.

Founded in 2017 as INS Ecosystem, the project initially was an Ethereum-based app connecting consumer goods and customers. As of June 2019, Insolar was positioning itself as a “company building a horizontally scalable hybrid blockchain platform with interoperability between public and private networks.” The launch of Insolar Mainnet comes after the company successfully launched its testnet last year.

In March 2019, Insolar released an updated iteration of the testnet that reportedly demonstrated a throughput of over 19,000 transactions per second. In order to ensure a stable mainnet launch, Insolar partnered with major global cybersecurity company Kaspersky Lab for an extensive testing and code audit. Additionally, Insolar has been collaborating with major global tech platforms such as tech giant Microsoft and computer technology corporation Oracle. Other purported partners include the Swiss Innovation Promotion Agency, Innosuisse, as well as the United Kingdom Energy Innovation Centre and the German Energy Agency. In conjunction with the mainnet launch, Insolar also announced that it will be offering bounties through bug bounty platform HackerOne in order to improve the network’s security. Insolar’s mainnet bug bounty program will initially only be available to a select group of specialists before a public rollout.

In a recent tweet, Ethereum network co-founder Vitalik Buterin said Bitcoin (BTC) and Bitcoin Cash (BCH) are not the same.

“Bitcoin Cash is not Bitcoin,” Buterin said in a Feb 1 tweet responding to Brad Mills’ accusation of Buterin as Bitcoin Cash promoter. Several tweets exist that might suggest Buterin is not 100% against BCH, although he clearly made the distinction that BCH is not BTC, even back in 2017.

Several months after a 2017 hard fork divided BTC into two coins, BTC and BCH, Buterin tweeted a seemingly positive comment toward BCH. “I consider BCH a legitimate contender for the Bitcoin name,” Buterin tweeted on Nov. 13, 2017. “I consider bitcoin’s *failure* to raise block sizes to keep fees reasonable to be a large (non-consensual) change to the ‘original plan’, morally tantamount to a hard fork.” Although one might possibly interpret this tweet as support for BCH, Buterin’s additional tweet on the same day clearly shows distinction. “That said, *right now*, I think trying to claim ‘BCH = bitcoin’ is a bad idea, as it *is* a minority opinion in the ‘greater bitcoin community,’” he said in a follow-up tweet. Almost one year later, in August 2018, Buterin again responded to BCH tweet with a comment consistent with his previous thoughts. Twitter user Meni Rosenfeld tweeted, “It has been one year since BCH split off from Bitcoin, and it is now clear that it has failed to gain traction as ‘the’ Bitcoin.” Rosenfeld added, “It was given its chance but now it should cease confusing the market with the inappropriate name ‘Bitcoin Cash.’” Buterin responded:

“I disagree. ‘Bitcoin Cash is Bitcoin’ is at this point unrealistic, but the name Bitcoin Cash by itself is totally fine.”

According to Buterin’s comments, it seems like the Ethereum co-founder has not always been negative toward Bitcoin Cash, but he has clearly signified a difference between BTC and BCH through the years. In his most recent note on the subject, commenting on a BCH development fund Twitter post, Buterin said:

“In case you’re wondering what side I’m on in all of this, I’m on the side of taking public goods challenges seriously and being open to adjusting ideological preconceptions while maintaining a commitment to core values of decentralization in order to meet them.”